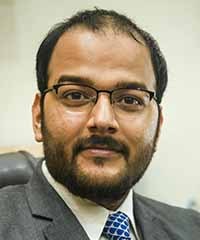 Advocate based in Delhi-NCR/ Lucknow.
Fields of practice: Civil, Criminal, Consumer, Matrimonial, Divorce, company matters & miscellaneous matters. He appears regularly before various courts and tribunals and has a wide experience in drafting, and if required can provide legal assistance virtually also.
Anilesh did his graduation from Jamia Millia Islamia (A Central University). Anilesh believes in giving to his client(s) an easy solution for resolving the dispute.

Date
Type of case
Description
Outcome
1 Mar 2019
Civil Law
The Assistant Director (Soil Testing/ Culture), Regional Soil Testing Laboratory, Merrut was suspended by the appointing authority
Got the suspension order quashed from the High Court
1 Oct 2018
Constitutional Law
Post- retiral dues were not paid to the petitioner and the department cited the reason that the department is going through some financial crunch
The HC directed the department to pay the entire-post retiral dues with interest
1 Feb 2018
Criminal Law
False case under 138 of the Negotiable Instrument Act was filed, the same was challenged before the HC u/s 482
Stay was given by the HC
1 Feb 2018
Criminal Law
NBW was issued against the accused for non appearance after taking the bail. Accused was not appearing since last 10 years
Got a direction from the HC for consideration of cancellation of NBW and got the matter compounded.
1 Jan 2018
Family Law
Mutual consent divorce wherein the cooling off period was waived off by the court
The divorce was decreed within 2 months from the date of institution of case in light of SC judgment
1 Jan 2018
Civil Law
Writ Petition was filed in the HC for getting the post retiral dues of the employee
Post retiral dues were given with the interest at bank rate
1 Oct 2017
Constitutional Law
File a writ petition in the HC thereupon challenging the compounding done by the MVDA thereupon allowing the construction of illegal structure
The writ has been admitted, notice has been issued and is pending consideration
1 Jul 2017
Family Law
Custody of the Child was given to the mother at the time of Mutual Consent divorce, the custody of the child has been claimed lately on the ground of changed circumstances.
The case is pending and as an interim relief the grandmother was allowed to meet the child
1 Jul 2017
Criminal Law
Bail for a person on whom charges of section 377 was imposed by her wife
Filed a writ in the HC challenging the FIR, the FIR quashed
1 Jan 2017
Family Law
Filed a mutual consent divorce in the Family Court
Case decided, divorce awarded
1 Aug 2016
Constitutional Law
Challenged the order of the Medical Council wherein the license of the doctor was cancelled illegally by the authority for 1 year
Decided, the order was quashed