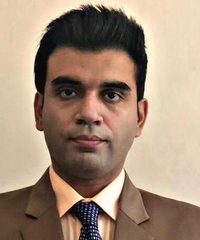 Ashish Davessar is an advocate practising in Rajasthan High Court, Jaipur with rich experience in diverse litigation on the original and appellate side and many reported judgments to credit.

Date
Type of case
Description
Outcome
1 Mar 2019
Criminal Law
The magistrate had framed charges against my client for the commission of offences punishable under Sections 474 IPC & 12 Passport Act as a fake Malaysian visa was found in his possession at airport.
In Criminal Revision filed and argued by me, the Sessions Court quashed the order and discharged him
1 Feb 2019
Criminal Law
FIR was registered under Sections 498-A, 406, 323 and 341 IPC.
I obtained anticipatory bail for all accused.
1 Feb 2019
Criminal Law
FIR was registered under Sections 498-A, 406, 323 and 341 IPC.
I got the FIR against my clients stayed from the High Court.
1 Jan 2019
Criminal Law
FIR was lodged against 8 of my clients under Sections 498-A, 406, 323 and 341 IPC, and they were apprehending their arrest.
I secured anticipatory bail for all the 8 accused.
1 Jun 2018
Family Law
There was inordinate delay by the trial court to decide the application for interim custody under DV Act, which frustrated the very object of the DV Act.
High Court ordered the trial court to decide the matter within one month.
1 May 2018
Criminal Law
The Magistrate had revived against my client two criminal complaints filed under 138 NI Act, which had previously been compounded.
In the Criminal Revisions argued by me for my client, the court quashed the order of the magistrate.
1 Aug 2017
Criminal Law
Raju versus State of Rajasthan decided on 11.8.2017 wherein my client had been held guilty by the trial court for the offences under Section 363, 366A, 376 IPC and Sections 3 and 5 of POSCO Act.
In appeal argued by me before the Rajasthan High Court, my client was acquitted of all offences.
1 Jun 2017
Constitutional Law
Visitation rights were granted by the Family Court to mother without deciding the application for interim custody.
In Writ Petition argued by me for father, the HC granted an interim stay on lower court's order.
1 Apr 2017
Criminal Law
The FIR was registered under Sections 498A and 406 IPC and Sections 3, 4 and 6 of Dowry Prohibition Act. The anticipatory bail application was dismissed by Sessions Court.
In the bail application argued by me in the High Court, the HC protected the liberty of my clients.
1 Mar 2017
Family Law
The Family Court was not accepting my client's application to engage a lawyer in the petition for child custody filed by his wife.
In the Writ Petition argued by me the HC ordered the trial court to take the application on record.
1 Nov 2016
Criminal Law
Appeal was filed by my client under Section 341 Cr.P.C as the trial court had dismissed his application u/s 340 Cr.P.C. to initiate the proceedings for forgery.
The appeal argued by me for my client before the appellate court was allowed.
1 May 2016
Criminal Law
My clients were threatened of implication in false cases by their daughter-in-law in connivance with powerful politicians.
I convinced the Sessions Court to direct the cops to issue a 7 day notice to my client before arrest
1 Nov 2015
Criminal Law
My clients were sister-in-law and brother-in-law of complainant who apprehended their arrest by police.
Anticipatory Bail was granted to my clients after hearing my arguments.

Other lawyers in Jaipur